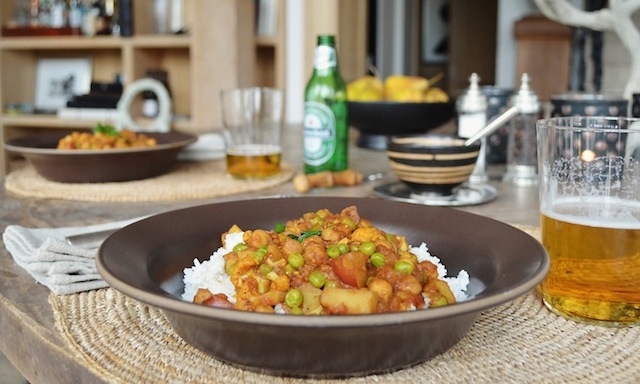 As you’ve all figured out by now, I have a natural inclination for anything in the animal fat or carbohydrate department (see the previous three postings for further confirmation: coconut cake anyone?)! Still, even a guy like me who can happily tear into a wedge of Gouda and a bag of crackers and call it dinner sometimes hits a wall — a wall on which the words “time to eat your vegetables!” have been emblazoned in big red letters. This impulse to go exclusively vegetarian doesn’t hit me all that often and is generally in direct proportion to the degree of excess associated with the meals that immediately preceded it, but when the idea does take hold, a bowl of steamed broccoli with lemon juice and (okay, I confess it) a few pats of butter is often just the ticket to put me back on my familiar track of carbo over-loading. That said it’s also a pretty damn-near perfect meal under any circumstances. 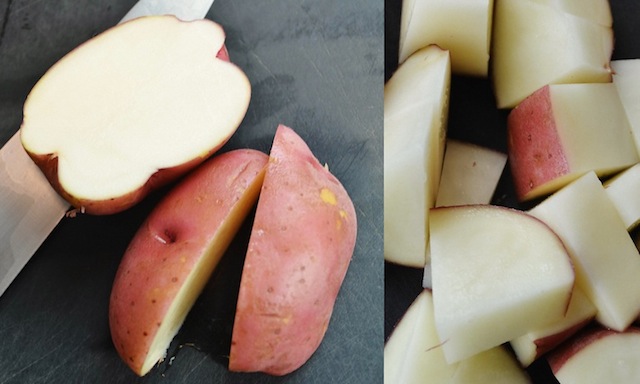 Because while I love all the less healthy stuff, I do like my vegetables and tend to eat them with gusto. It’s just that in my typical meal construction, they generally hold a supporting role and are rarely the main event. And since no one needs me to tell them about the pleasures of squeezing lemon juice over broccoli, or even sautéing spinach in olive oil with a dash of hot pepper flakes (in other words, the sorts of things one might find accompanying that grilled veal chop holding down the center of your dinner plate), coming up with main event vegetarian dishes that get my hungry man heart racing, while still feeling ambitious enough to share with you here, has been a challenge. Still, it’s a challenge I’ve been determined to meet — and not just because a steady diet of flour and butter gets tedious even for me, but also because two of the TRG team who labor behind the scenes (my friends Charlie and Andrew of Cinnamon Projects, and the duo responsible for this site’s design) eat no meat or dairy (plus a handful of other things that I can barely keep track of) and every once in a while it would be nice to post something they might be interested in cooking, too.

Well, I regret to say that this all vegetable, Indian-style curry isn’t it! It would have been, I think, as both men are keen on the sorts of bold, zippy flavors this dish offers in spades, but then I realized that two of the featured ingredients are ones that one or both of them are allergic to — namely onions and tomatoes… (You can imagine how challenging it is to cook for these guys!). Either way, it’s definitely a vegetarian dish I can get excited about making and eating, and that, by extension, is one I believe is worth sharing with you. For one thing it’s a starring role vegetable dish, and not an under the headline participant cast purely for its ability to provide a frame for the featured act. And for another thing, the mix of those bright flavors mentioned above, married to the various hearty ingredients called for by the recipe (the cauliflower, the potatoes, the chickpeas), make for the sort of vegetarian experience that can satisfy even the most committed carnivore. 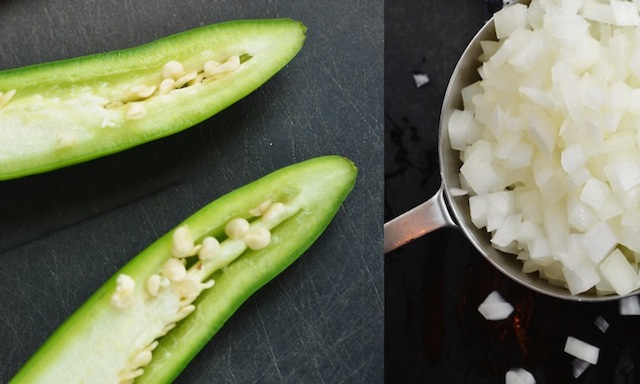 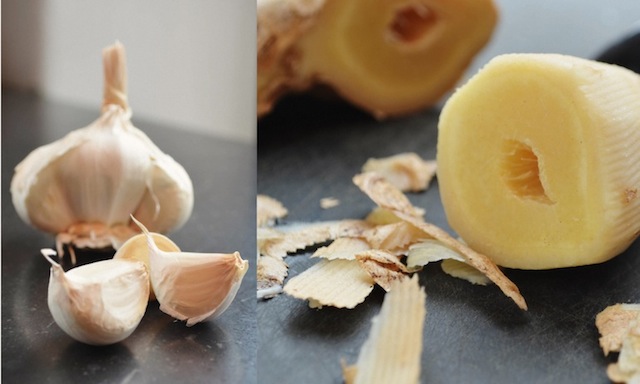 All this begins to make sense once you realize that the recipe was inspired by the cooking of India — a country where vegetables are frequently front and center in many entrees, and where even the condiments come on strong. Of course, that strength may be more than some western palates are prepared for, just as the time involved in preparing authentic Indian cooking may be more than some cooks are willing to commit to. But with that in mind the fine folks at America’s Test Kitchen have created an Indian-style curry that the average home chef can produce in an hour or so, using ingredients easily sourced at most supermarkets, not to mention one in which the heat can be easily dialed up or down according to personal preference. Want more heat?: add another half a chile. Want less?: eliminate the chile’s ribs and seeds. Either way, the flavors are bold and exotic in just the way one expects Indian cooking to be, but with a brightness and clarity that’s generally absent from the variety I find myself eating at least once a week. I’ve never been to India but this simplified version strikes me as a closer approximation of the cooking one might actually experience in that country.

Key to this is the fact that the dish’s all-important spices (curry powder and garam masala, both store bought) receive a powerful flavor boost thanks to a quick toasting in a dry skillet. In fact, this technique worked so well that many days after placing the mixture in a pan on my stovetop, both my apartment and the hallway beyond it continue to smell like an Indian bazaar (Alfredo is still lighting candles and spraying Febreze to try and eliminate the odor). So in other words, crank up the fan and open the windows before you try this at home, or be prepared to endure endless cracks from your neighbors!

Still, that fragrance bomb was a hint of things to come, particularly once the toasted spices were added to a sauté of garlic, ginger, chile, tomato paste, and onion. Together these ingredients form a muscular flavor base, and one that effectively works its way into the potatoes, the cauliflower, and the chickpeas — which here function as the “meat” of the dish. A can of diced tomatoes (pureed in the food processor) and a little water provide the stew with some all-important moisture, while a splash of heavy cream or coconut milk introduced in the final minutes functions as a thickening agent for the sauce and gives it a kind of silky consistency (don’t stress over which liquid you use, as the addition is purely about texture, not flavor). Served atop some basmati rice and alongside a few spoonfuls of mango chutney and suddenly I was in the presence of a dish that cast being vegetarian in a whole new light — one that had nothing to do with balancing out a pileup of dietary sins, but purely with eating well. 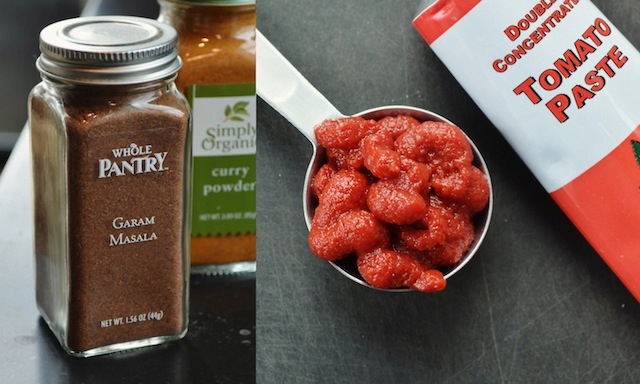 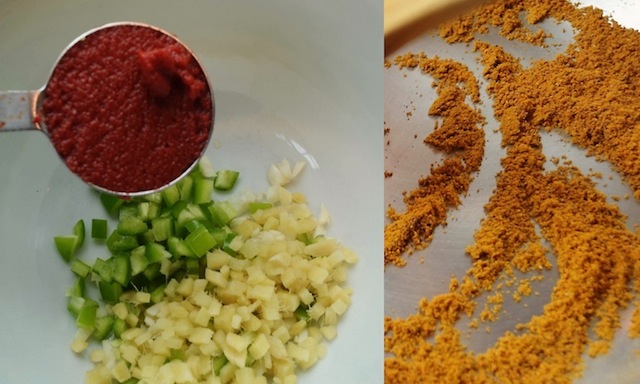 Note #1: This curry is moderately spicy when made with one chile; for more heat use an additional half chile. For a mild curry, remove the chile’s ribs and seeds before mincing. 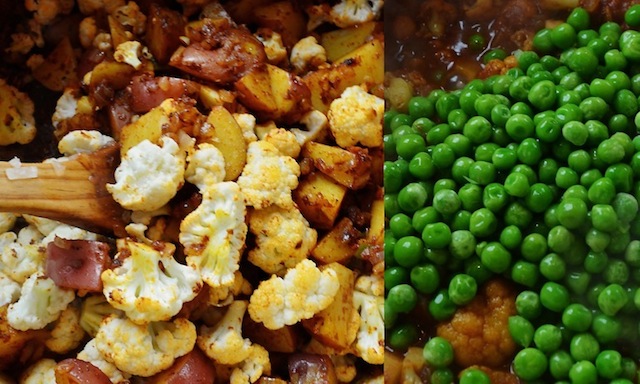 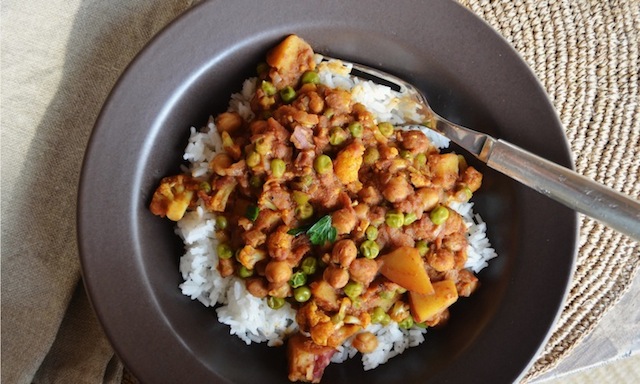