From the June/July, 2013 Fine Cooking 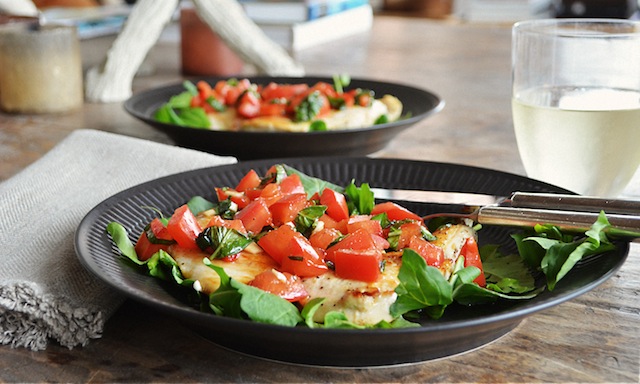 There’s nothing like the anticipation of big events in your life (and the arrival of your 5th decade!) to spur change, which I suppose explains why Alfredo and I have recently made some alterations to our way of doing things—specifically in the realm of food. This isn’t the first time we’ve made such tweaks but it is the only occasion I can remember where the goal was less about looking good then it was about feeling better and having more energy (though needless to say, we’ll happily take the former should that present itself as a by-product). Alfredo was the first out of the gate on this one, and after meeting with a doctor in early April he went on a two-week detox program. Once that step was complete he eliminated all processed foods from his diet, focusing instead on lean proteins and lots of fruits and vegetables. The results have been pretty astonishing: in just under two months he’s dropped 25 pounds of fat, without losing any muscle mass. Naturally he feels better not carrying all that extra weight around, but his energy has also increased exponentially, which means he now bounds out of bed before the alarm goes off at 6:00 am (annoying to me as there is no bounding happening in my day before 11:00 am and several large cups of coffee). I know he misses things like bread and crackers and pizza (this most of all) but at least for now, the plusses so far outweigh the minuses that he’s sticking to the program with virtually no complaint. In other words, up to this point it’s been pretty easy for him. 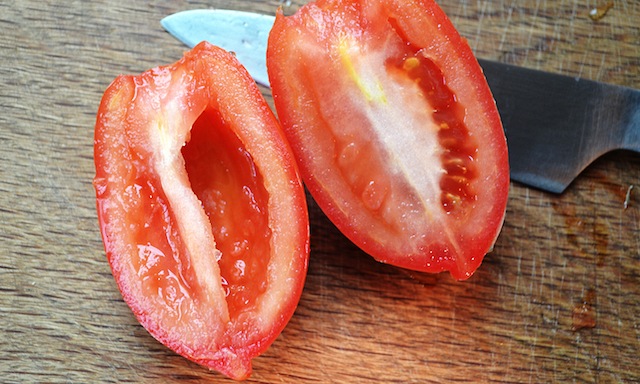 As for me, the issue is not about losing weight but rather about increasing my energy, something I’ve felt I needed to address for a while now. Aside from the fact that I’m not a morning person (that will probably never change), on many weekday afternoons I find myself struggling to stay awake as I stare into my computer screen. Granted, I’m not getting my full eight hours of sleep every night (more like six) but that shouldn’t require an emergency espresso to get me through the second half of the day. And so I too have launched into the world of detox and, at least for the next 10 days, have sworn off sugar and carbohydrates. It’s only been a day but I have to say I feel pretty awful. I’ve always thought of myself as someone who ate healthfully (if not maniacally so), but the elimination of those three packets of sugar from my morning coffee, and that slice or two of bread from alongside my lunchtime salad, seems to have created both a psychological absence for me, as well as a physiological one. I need a sugar fix, bad! Maybe day two will be easier…

In any case, before I even launched into my own self-improvement program, the changes in Alfredo’s eating habits had prompted me to look out for dishes he’d actually eat (not that I plan to eliminate desserts or pasta or anything involving flour from this blog—where would the joy be in that?). Still, in these early days of his diet I didn’t want to torture him with the likes of brown butter financiers or an Asian noodle salad with roasted peanuts, so I put my sugar/flour blinders on and zeroed in on this recipe for pan-fried chicken breasts with a tomato and basil salad, from the current issue of Fine Cooking. And having now made it a couple of times I’m happy to report that despite my love affair with processed foods (and by that I don’t mean potato chips, but rather things like fresh bread and maple syrup) I’d happily eat this dish any night of the week—especially a summer night, when the bright flavors featured here are particularly well-suited. Then again, given the number of chicken and tomato recipes I’ve posted on this site over the past few years that probably comes as no surprise. We all have particular flavor combinations we’re drawn to, and I guess chicken and tomatoes is one of those for me. 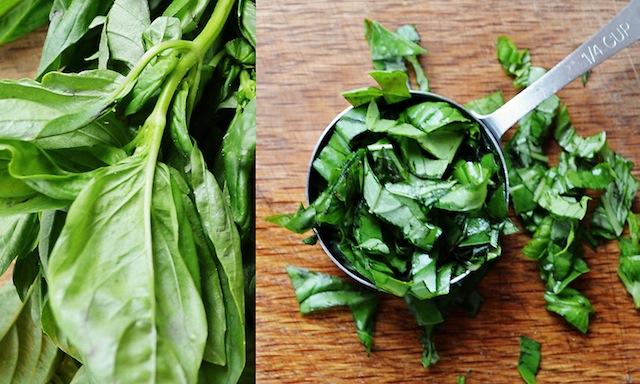 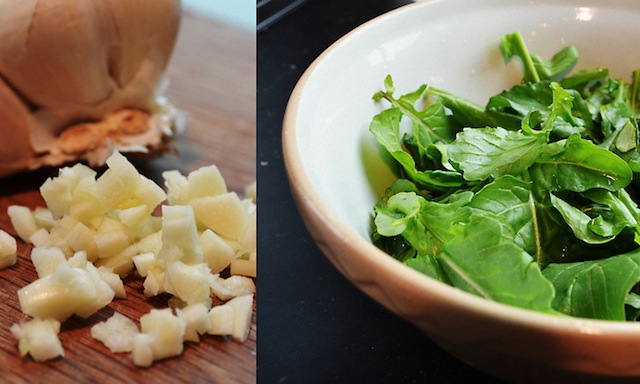 Of course, it’s no secret that I also have a weakness for the acidic side of the food spectrum—something this dish offers as well, thanks to the presence of 2½ tablespoons of balsamic vinegar in the tomato mixture. The vinegar, plus a ¼ cup of thinly sliced basil leaves, a generous glug of olive oil, and some salt, pepper, and finely chopped garlic is all it takes to give this component of the dish a bright summery quality. As such, it’s the perfect counterpoint to the salty, slightly caramelized exterior of the cutlets, and the peppery arugula its sits atop. That said, you may want to tinker with the garlic quantity as on occasion I’ve found the single clove called for by the recipe to be over-powering (though admittedly I may have been working with an exceptionally strong clove).

As for the chicken breasts, these are sliced in half horizontally almost all the way through, so you can open the two halves like a book. Once pounded thin with a meat mallet or a heavy pan (sandwich the breasts between two sheets of plastic wrap so the pounding doesn’t damage the meat) the chicken can be lightly salted and peppered, and then introduced into a skillet with a little hot oil. Working with two breasts at a time, cook the chicken until golden brown (between 2 and 3 minutes), then flip and cook the other side for 30 seconds more. Repeat with the remaining two breasts, keeping the first two warm in a low oven. Once all the chicken has been cooked, place each breast on a plate containing a portion of the arugula, then top generously with the tomatoes and accompanying juices. That’s all there is to it, so not only is this a healthy dinner, it’s one that can be assembled in little more than half an hour.

The other nice thing is that the tomato and arugula treatment lends itself to a variety of other pairings as well, most notably sliced steak. That said the tomato mixture tends not to be great the next day (tomatoes don’t do well in the fridge, unfortunately) which means leftovers aren’t nearly the treat you hope they’ll be. Then again, it’s an issue you’re unlikely to face, since in my experience the only thing remaining at meal’s end is a lot of empty plates. 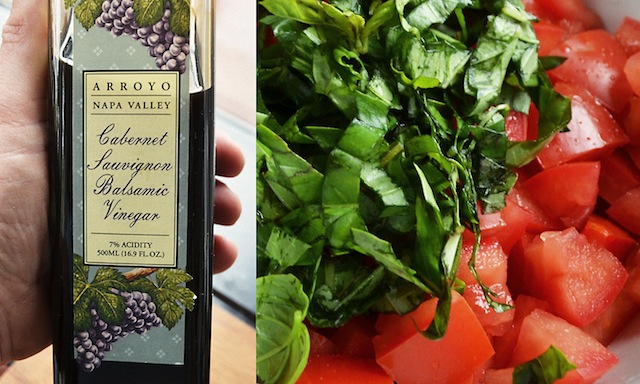 Directions:
—Position a rack in the center of the oven and heat the oven to 200˚.
—In a medium bowl, combine the tomatoes, basil, 3 tbs of the oil, the vinegar, garlic, ¼ tsp salt, and 1/8 tsp pepper.
—Butterfly each chicken breast by slicing it horizontally almost but not entirely in half so you can open it like a book. Open and pound each breast between two pieces of plastic wrap with a meat mallet or the bottom of a heavy pan until ¼ inch thick.
—Pat the chicken dry and season lightly with salt and pepper. Heat 1 tbs of the remaining oil in a 12-inch skillet over medium-high heat until shimmering. Cook two of the breasts until golden brown on one side, 2 to 3 minutes. Flip and continue to cook until just cooked through, about 30 seconds more. Transfer to a rimmed baking sheet and keep warm in the oven. Repeat with the remaining 1 tbs oil and chicken.
—Divide the arugula among 4 dinner plates. Set the chicken on top, spoon a generous amount of the tomato mixture and its juice over all. 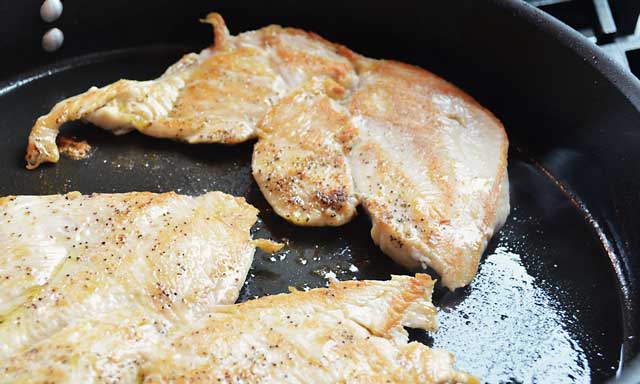