From A Taste of Old Cuba (HarperCollins) 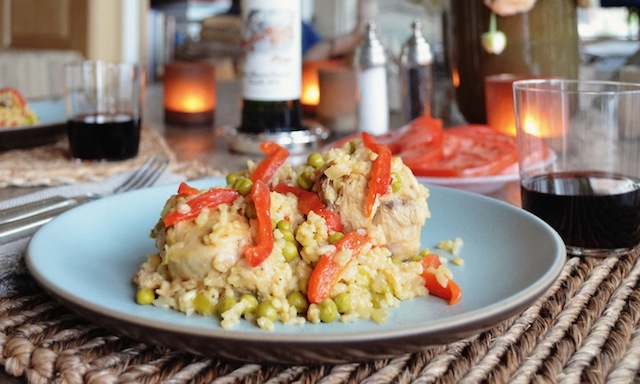 Last night Alfredo and I hosted a small dinner for our good friend Scott who was celebrating one of those big birthdays that only come around a few times in your life—the kind with a nice round number that the celebrant generally prefers not to linger on (and so I won’t either). It was a great night with good friends, good food, and too much drinking, and I have a doozy of a hangover to show for it, one that’s made everything from getting to work today to stringing together a coherent sentence especially challenging. Still, the evening was well worth all the frustrations of this morning, not least of which because Scott seemed to so thoroughly enjoy himself. And, on a secondary level, it gave me an excuse to whip up a large batch of paella, something I’ve been craving, and which is the ultimate party food in my book. 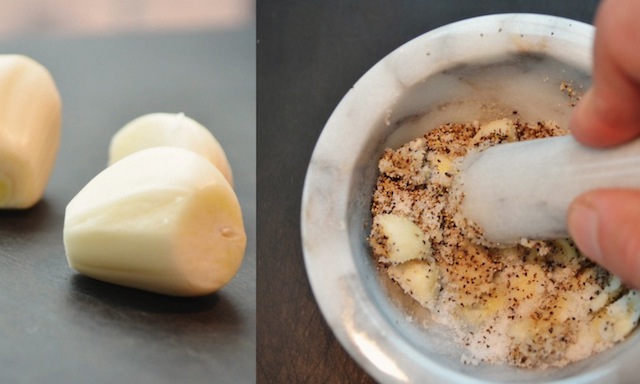 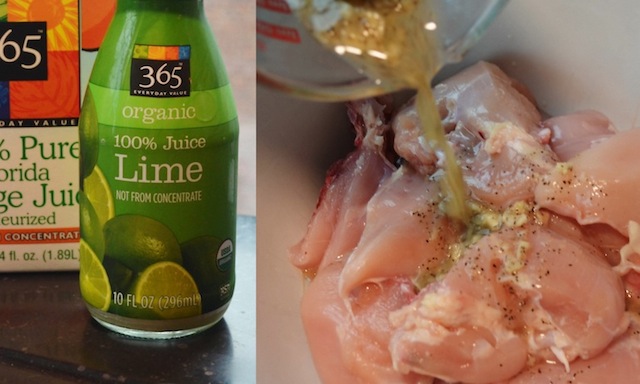 In truth, you kind of need a party to get up the mojo required to make paella, because there’s a lot of advance work associated with preparing it. The good news is that most of the heavy-lifting is done before your guests arrive, which means you can stand around drinking too much wine without worrying whether dinner will make it to the table. And it makes for an impressive presentation on the plate that doesn’t require lots of different serving dishes—it’s a vivid one-dish meal that everyone tends to like (as long as all your guests eat shellfish). I mean what could be better than chunks of chicken, chorizo, and shrimp, nestled in a mound of rice that’s plump with the moisture of absorbed chicken broth, all of it infused with the flavor of saffron? In fact, I have a Tupperware container holding some of last night’s leftovers sitting here on my desk, and it’s been teasing me since about 10:30 this morning, asking me if it isn’t lunchtime yet.

Which brings me to the subject of this week’s posting, arroz con pollo (rice with chicken)—a Cuban classic that’s similar to paella in some significant ways but that features a fraction of the ingredients and is less labor intensive as a result. Like paella, arroz con pollo calls on saffron for flavoring and a short grain rice such as Valencia or Bomba for the all-important starch. And in both dishes the rice is left to cook in a large quantity of chicken broth, liquid that it tends to suck right up thanks to the magnificent absorption properties associated with this variety of grain. In this way the consistency of the finished dish is almost like risotto—not quite as broken down, but sticky, wet, and full of the flavors of whatever other ingredients have been added to the pot. 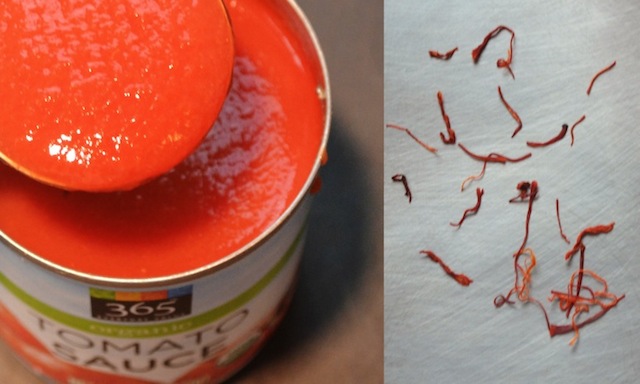 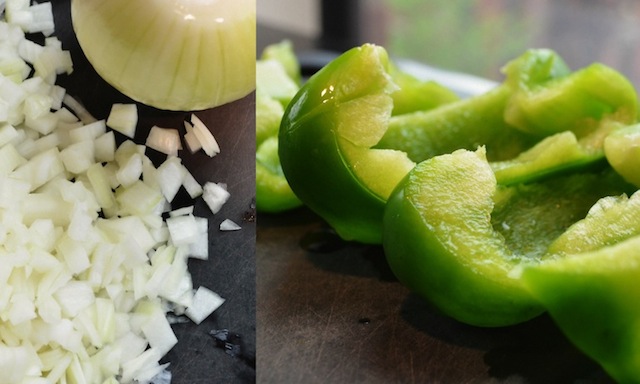 In the case of arroz con pollo, the rice is not just cooked alongside the saffron and the chicken broth, but also several pounds of previously browned chicken parts, as well as a quantity of sautéed onions and green peppers . . . and nothing else. In other words, unlike paella, arroz con pollo is only rice and chicken—meaning there’s no seafood, no chorizo, and none of those other tasty add-ins that tend to be featured in the Spanish dish. Think of it as a simplified version of paella, and a meal that’s simple enough for an easy weeknight dinner.

The version of the recipe I bring to you here comes from A Taste of Old Cuba by María Josefa Lluriá de O’Higgins (I love this woman’s name almost as much as I love her classic Cuban recipes!), and the dish takes no more than forty-five minutes or so to prepare, not counting the time needed to marinate the chicken in a mixture of mashed garlic, salt, pepper and something called “sour orange juice.” This last item is produced by a number of companies, including Goya (who markets it under the name “naranja agria”), though in my experience it’s hard to find it at most markets. No worries, though—it can be made easily enough by mixing regular orange juice with an equal amount of lime juice. As for the marinating process itself, though the recipe suggests allowing just an hour for this, Alfredo’s aunt Toya extends this to as much as four hours, something I tried on my last outing and will incorporate into future versions, as well.

Also, while the recipe calls for a mixture of breasts, thighs and drumsticks, I prefer all white meat, cut crosswise to make for a more manageable size. In any case, once marinated it’s time to brown the chicken, a process that should take about three minutes per side. The recipe says to do this in a wide shallow pan, but given the three cups of liquid to follow, here again I’d propose a small change, swapping the wide pan for a large Dutch oven. Either way, when the chicken has taken on a nice golden color it’s removed from the pot and set aside, at which point it’s time to sauté the onions and pepper, which serve as the flavoring backbone for this dish. After three minutes or so these ingredients should take on a translucent quality, which tells you it’s time to introduce most of the other items—the broth, the saffron, the tomato sauce, the marinade the chicken was left to soak in, and the chicken itself. This mixture is left to simmer for five minutes, and then it’s time to add the star ingredient: the rice. 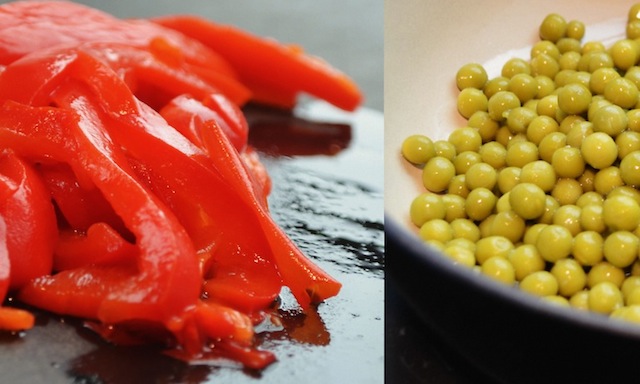 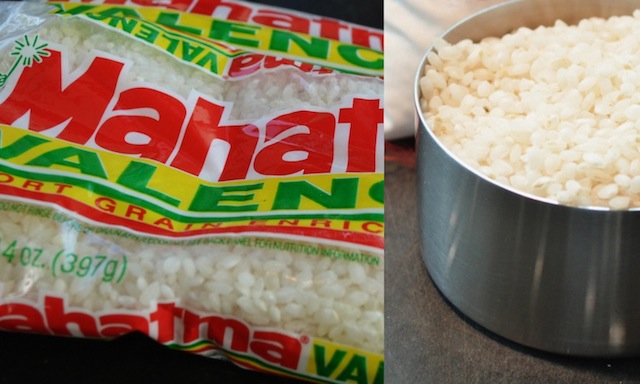 Since the rice (duh) requires liquid to cook, it’s important that all the grains be fully submerged—and to stay that way—during the estimated half hour of cooking time. That means it’s important to keep an eye on the pot and to add more liquid (chicken broth, dry white wine, even beer) as needed. Also, while those thirty minutes should be sufficient to get the job done, on a few occasions I’ve found it took longer. If that’s the case be sure to give the mixture a few good stirs as you go, since the rice at the bottom of the pot risks burning after more than thirty minutes. In any case, once the liquid has been absorbed and the rice is plump and tender, remove the pot from the heat while you quickly warm the petit pois and the sliced pimiento. These are then scattered across the surface of the finished dish. And that’s it!

According to the recipe the finished dish should be enough to serve between six and eight people, though in my experience the number is more like four—something I attribute to just how very good this simple dish can be. So good, in fact, that the last time I prepared it I began to congratulate myself on having taken a key step in mastering the art of Cuban cooking. Alfredo, however, was not quite as effusive. While he agreed that the dish tasted just as it should, he found it lacking in one key area: color—specifically the bright yellow hue associated with so much of the prepared rice in Cuban cooking. And this despite the fact that I’d gone heavy on the saffron! So in search of an answer I reached out once again to Alfredo’s aunt, who revealed that the secret lay in a condiment called Bijol, which is produced in Cuba and is composed of a mixture of corn flour, ground cumin and a few other goodies, including (ahem) food coloring. In the case of my arroz con pollo, she assured me that a ¼ teaspoon or so would be enough to imbue it with the signature shade associated with the country’s signature starch, all without altering the flavor. I’m still not quite sure how I feel about adding food coloring to my cooking, though I suppose when it comes to flying the proper colors for a favorite national dish, exceptions must be made. 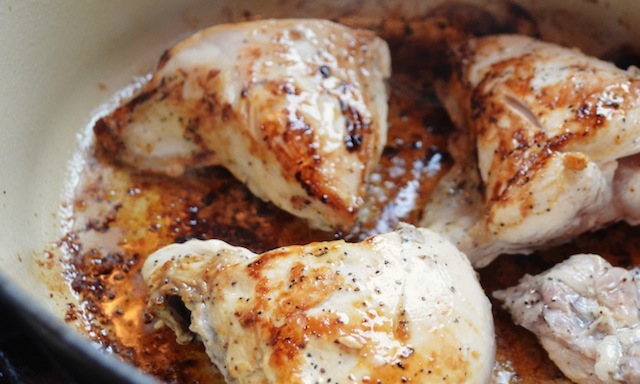 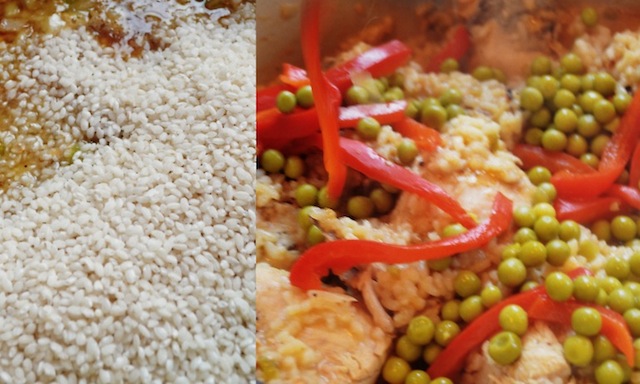 Ingredients:
—3 garlic cloves, peeled
—1 tbs salt
—1 tsp pepper
—1/4 cup *sour orange juice (or a 50/50 mixture of sweet orange juice and lime juice)
—4 lbs skinned chicken thighs, legs, and breasts
—1/4 vegetable oil
—2 medium onions, peeled and finely chopped
—1 large green pepper, cored, seeded, and finely chopped
—3 cups chicken broth
—4 strands saffron, toasted in a dry skillet over medium heat for about 30 seconds or until they lose their moisture
—2 tbs tomato sauce
—2 cups Valencia rice
—Beer, dry white wine, or additional chicken broth
—Two 8 oz cans petit pois (tiny peas), drained, or 1 cup tiny frozen peas, thawed
—One 6 oz jar pimientos, drained and cut into strips
*Goya produces a concentrated sour orange juice called Naranja Agria.
Directions:
—Mash the garlic into a paste with the salt and pepper. (A mortar and pestle works best, but you may mince the garlic finely with a knife or put it through a garlic press and mash the seasonings in with a fork.)
—Add the orange juice and pour this marinade over the chicken pieces. Refrigerate for about one hour.
—Heat the oil over medium heat in a paella pan or other wide, shallow pan. (NOTE: As mentioned above, I prefer to use a large Dutch oven.)
—Blot the chicken pieces on paper towels and brown them in the hot oil. Reserve the marinade. Set the browned chicken pieces aside.
—In the same oil, sauté the onions and green pepper until the onions are translucent, about 3 minutes. Add the broth, saffron, tomato sauce, reserved marinade, and the chicken and simmer for about 5 minutes.
—Add the rice and stir just enough to cover it with liquid. If the rice is not fully covered, add more broth, wine, or beer. Simmer until all the liquid has been absorbed and the rice is cooked, about 30 minutes. Add more broth, wine, or beer as needed.
—Remove the pan from the heat while you warm the peas and pimientos separately. Garnish the arroz con pollo with them and serve.
Serves 6 to 8 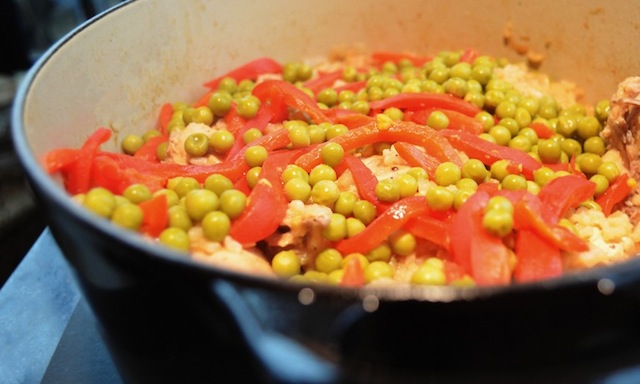