Towards the end of last winter, as the days were getting longer and the damp, New York City chill was just beginning to loosen its pincer-like grip, I made a dish I’m often drawn to when it’s cold outside: beef stew. From this you might assume that stew is a particular favorite of mine, and it’s true that when said dish features a rich, robust sauce, a variety of bright, caramelized vegetables, and meat that’s as fork-tender as it is deeply flavored, I am indeed a happy man. Too often, though, whatever recipe I’m working with produces less than this desired combination—because the meat is tough, the vegetables mushy, or the sauce fails to deliver the zesty kick that’s such a critical component for me. And so over the past few winters I’ve tried a variety of stew recipes, all in the hope of finally achieving stew nirvana. It proved a frustratingly elusive state and one I’d all but given up on attaining until that day last February when, quite unexpectedly, I landed on the answer to my beefy dreams. 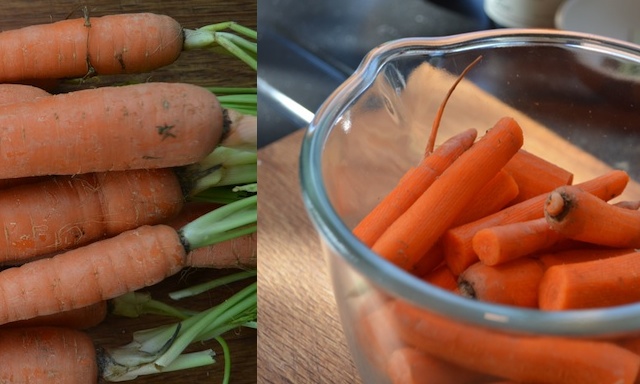 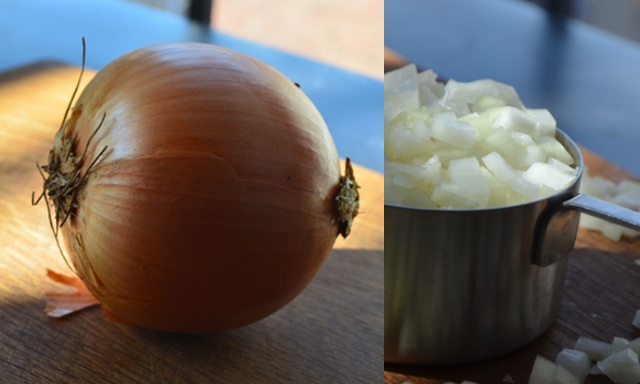 Of course, I knew the recipe I was trying held promise—for one thing it came courtesy of Jacques Pépin (via Food and Wine), the man behind any number of my favorite dishes. But it also called for an entire bottle of full-bodied red wine, an enticing mix of vegetables (baby carrots, cipollini onions, cremini mushrooms), and a handful of diced lardons, all ingredients that suggested the sort of deep, enveloping flavors I was after. What’s more, the combination suggested something more akin to the French boeuf Bourgignon than to classic American stew, which given my particular stew frustrations struck me as a good thing. Still, I’ve held promising stew recipes in my hand before only to have my hopes dashed when it came to the eating, so whatever anticipation I felt as I assembled my ingredients and got down to cooking was tempered by the suspicion that the finished product would likely fall short of my high standards. 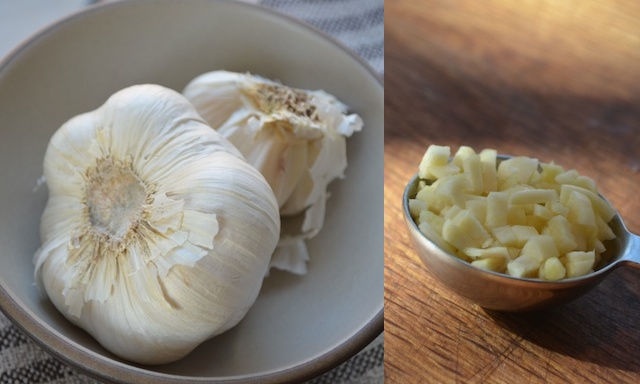 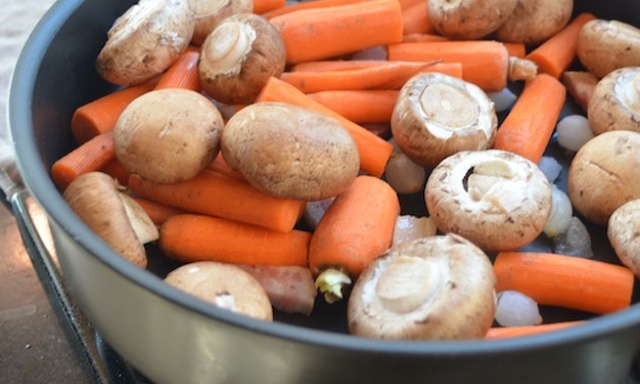 Right from the start, however, things took an appealingly fragrant turn, when the beef was introduced to the melted butter/olive oil waiting in my cast iron pot, and later when the chopped onion and garlic were added to the proceedings. I don’t know about you, but on a chilly Sunday afternoon there are few smells more comforting—or mouth-watering—than that of beef, onions, and garlic sizzling in a pan of olive oil. And it’s a combination of cooking smells that only gets better when you add your bottle of red wine, along with a big sprig of thyme and a few bay leaves, to the pot. If comfort food had a signature smell this would be it: bright, zesty, and a little spicy. And it’s a medley of fragrances you’ll be enjoying for the next ninety minutes, since once the wine comes to a boil the pot is covered and moved to a 350˚ oven, where the sauce will thicken and reduce, and the meat will contract and tenderize. 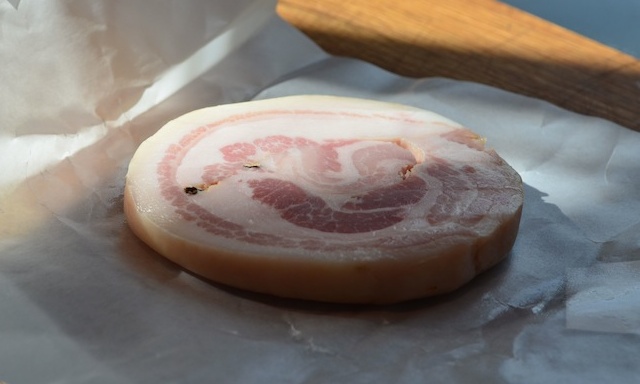 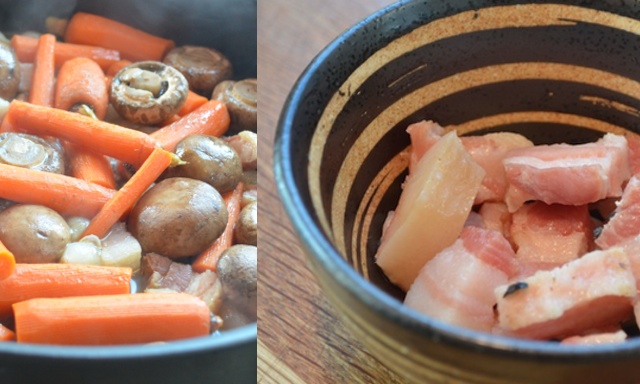 Of course, no stew would be complete without those all-important vegetables, which here are cooked separately and added to the stew just before serving—a neat trick that protects against the buzz-kill of mushy vegetables. To start, simmer the pancetta in two cups of water for 20 minutes, a process that leaches some of the saltiness from the cured meat and keeps it from overpowering the flavors of the other ingredients once it’s introduced to the mixture. The pancetta is then sliced into lardons and added to a skillet along with the onions, the mushrooms, and the carrots, as well as a tablespoon of olive oil, a ¼ cup of water, and a little seasoning (a large pinch each of salt, pepper, and sugar).

Once the liquid comes to a boil (this will be quick, as there’s not all that much water or olive oil to heat) cover the skillet and simmer until most of the liquid has evaporated—including the additional volume released by the mushrooms. This is followed by a quick sauté (about four minutes), or until the vegetables are tender and nicely browned. That said, if you’re not able to find baby carrots (there were none to be had on my most recent foray, the photos of which are presented here) and are using a larger variety, in addition to cutting them into bite size pieces, you may need to extend the simmer time by five minutes or so to ensure everything is sufficiently tender. I should also mention that in addition to those carrots I had difficulty locating either cipollini or pearl onions (according to the recipe either will do), and so was forced to use frozen pearl onions—which, despite their time saving appeal should only be used as a last resort since they’re virtually flavorless. If you do find yourself in the happy position of being able to choose between the two options, however, I strongly suggest going with the larger cipollini onions over the pearl, as their generous proportions present a more satisfying burst of sweet onion flavor, while their flat sides lend themselves to better browning. 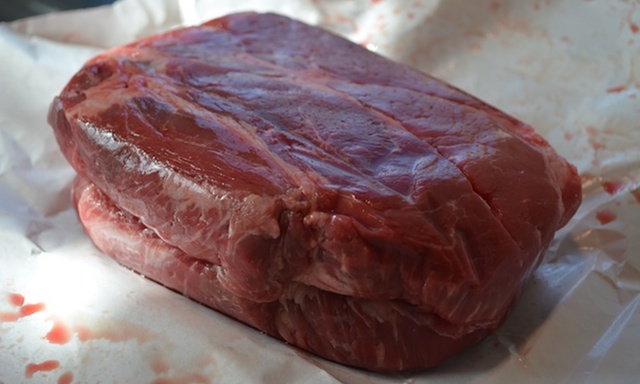 When the vegetables are sufficiently tender fold the majority into the meat mixture, reserving a small portion to be used, along with a few pinches of freshly chopped parsley, as garnish. The net result is a finished product that’s as bright visually as it is in the flavor department, while the meat—blanketed in a rich, tangy sauce—is miraculously tender and moist. In fact, “miraculous” is just the word that came to my mind on that chilly Sunday last winter when I first made this dish—which by the way is most definitely designed for eating with a fork, versus the brothier variety requiring a spoon… another selling point in my book. At last, here was a dish that checked all of my requirements, and was blessedly easy to prepare, as well.

Cold weather? Bring it on. 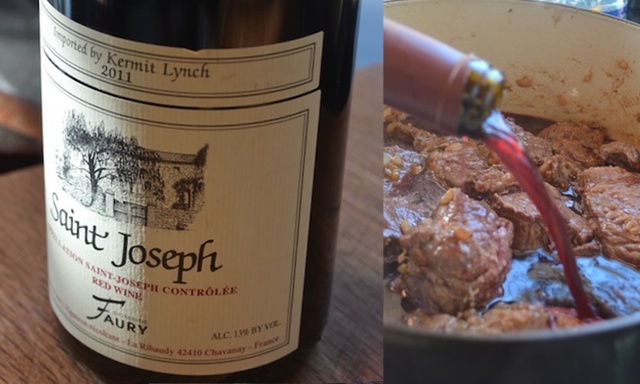 Directions:
—Preheat oven to 350°.
—In a large enameled cast-iron casserole, melt the butter in 1 tbs of the olive oil. Arrange the meat in the casserole in a single layer and season with salt and pepper. Cook over moderately high heat, turning occasionally, until browned on all sides, 8 minutes. Add the chopped onion and garlic and cook over moderate heat, stirring occasionally, until the onion is softened, 5 minutes. Add the flour and stir to coat the meat with it. Add the wine, bay leaves, and thyme, season with salt and pepper, and bring to a boil, stirring to dissolve any brown bits stuck to the bottom of the pot.
—Cover the casserole and transfer it to the oven. Cook the stew for 1 1/2 hours, until the meat is very tender and the sauce is flavorful.
—Meanwhile, in a saucepan, cover the pancetta with 2 cups of water and bring to a boil. Reduce the heat and simmer for 30 minutes. Drain the pancetta and slice it 1/2 inch thick, then cut the slices into 1-inch-wide lardons.
—In a large skillet, combine the pancetta, pearl onions, mushrooms, and carrots. Add the remaining 1 tbs of olive oil, 1/4 cup of water, and a large pinch each of sugar, salt, and pepper. Bring to a boil, cover, and simmer until almost all of the water has evaporated, about 15 minutes. Uncover and cook over high heat, tossing, until the vegetables are tender and nicely browned, about 4 minutes. (TRG note: If you’re unable to locate baby carrots and are using a larger variety, you’ll probably need to extend the steaming time by 5 to 10 minutes; make sure the vegetables are nearly fork tender before proceeding to the sauté stage).
—To serve, stir some of the vegetables and lardons into the stew and scatter the rest on top as a garnish. Top with a little chopped parsley and serve. 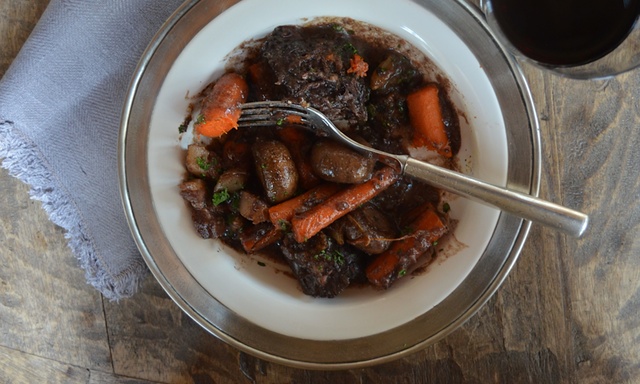