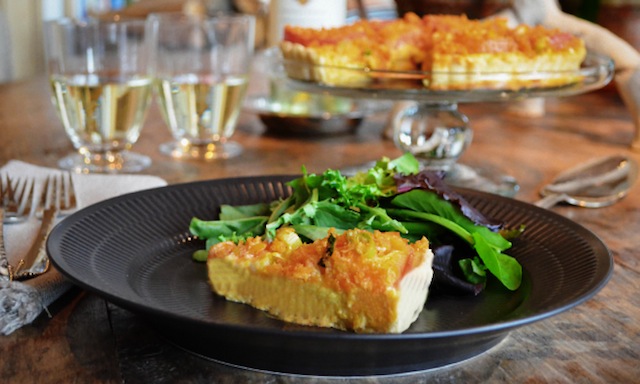 If you’re the sort of person who reflexively slows down whenever a roadside farm-stand comes into view, then you’ve officially entered whiplash season. That was my conclusion last weekend, anyway, as I tooled around the East End of Long Island and found my head repeatedly swiveling right, then left, then right again. Farm-stands, of course, have been piled high with good stuff for months now, but in the last few weeks things seem to have taken a particularly distracting turn, with late summer tomatoes and corn vying for space alongside zucchini, squash, peaches, all manner of berries, and that ultimate (non-edible) attention grabber, sunflowers. For a food-minded individual like myself, it’s enough to make you start hyperventilating, wondering when, and how (!), you can possibly make the most of all this bounty before it withers away and it’s back to frozen pea-time. That “how” is a critical question, not just because there are only so many eating opportunities in a given week, but because (as addressed in my corn and tomato salad posting of a few weeks ago) no matter how spectacular the produce you’re working with, by this point in the season a certain sameness can set in. The challenge is landing on a preparation for those peaches, or zucchini, or what-have-you, that will keep things sufficiently exciting while still respecting what’s best about this direct from the farm goodness in the first place: its exceptionally vivid flavor. 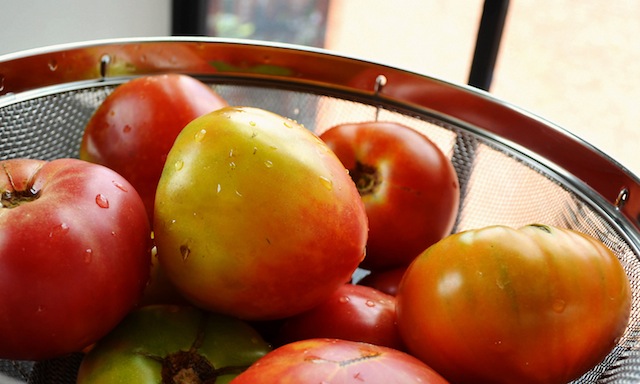 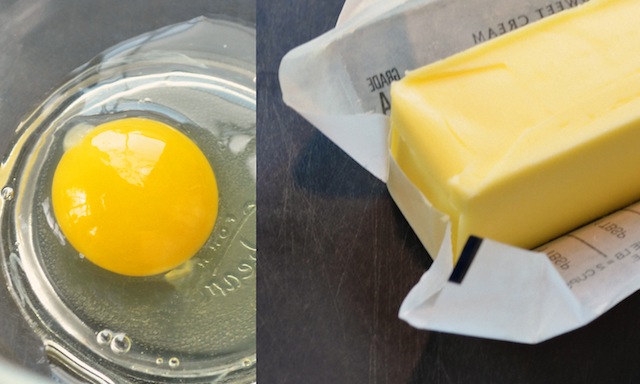 Those two qualities (the excitement, the purity of flavor) were just a few of the things I liked about this recipe for a corn and heirloom tomato tart. It’s a preparation I pulled from the current issue of Elle Décor, a magazine I consistently find myself thumbing through each month both because there are few things more fun than checking out other people’s houses, but also because I’m a big fan of Daniel Boulud’s regular cooking column—especially when the featured recipe offers a twist on something traditionally French. Here that attitude comes in the way this dish echoes quiche (that onetime obsession of so many American cooks), not to mention the way the tart’s tomato topping is mixed with Parmesan cheese, breadcrumbs, and a variety of the other ingredients, all of which lends it a decidedly Provencal flavor. That said the tart’s corn pudding base is nothing if not American, making the entire combo an appealing kind of Franco-American mash-up I was drawn to. For those reasons, as well as the fact that I’m a fan of most any savory assortment that’s nestled within a tart shell, this was a recipe I couldn’t wait to try. 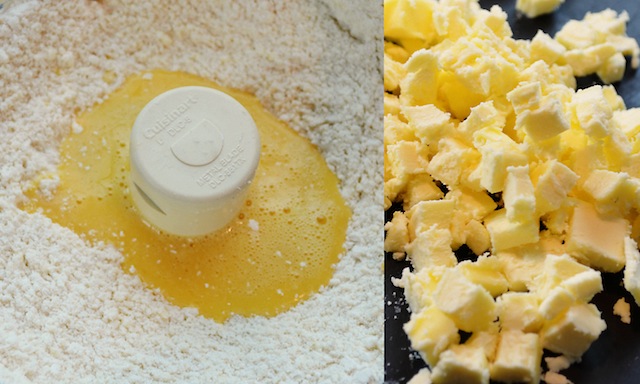 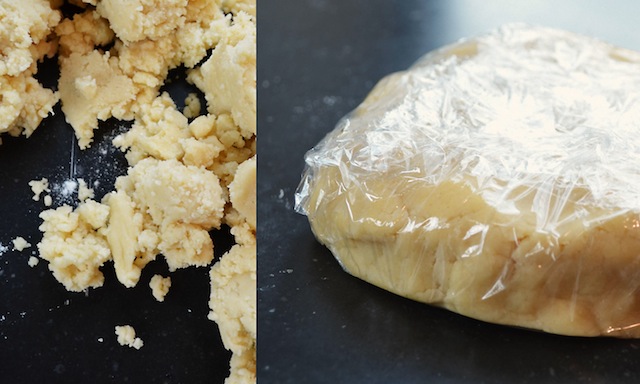 I’ve also recently become enamored of making pastry dough, something that for many years I had an irrational fear of tackling. If that’s an anxiety you can relate to—and even if it isn’t—this is a good recipe to add to your repertoire, as it’s so very simple. Boulud describes the version included here as a classic “pâte brisée”—a term that the website Cookthink defines as “shortcut pastry,” the pastry of choice for quiche and tarts, and one comprising equal parts fat (as in butter, lard, or shortening) and flour, merged and then bound with a bit of water or egg yolk. That one-to-one ratio does not exactly hold with the recipe presented here, but the idea is basically the same. So in the Boulud version, flour, butter, and a small amount of salt are combined (“pulsed”) in a food processor until crumbs form, at which point a lightly beaten egg is added to the mixture. This, too, is pulsed until the mixture starts to clump. When telltale curds start to appear, place the mixture onto a work surface, kneed a few times, wrap with cellophane, and refrigerate for at least an hour so the various ingredients have a chance to come together. 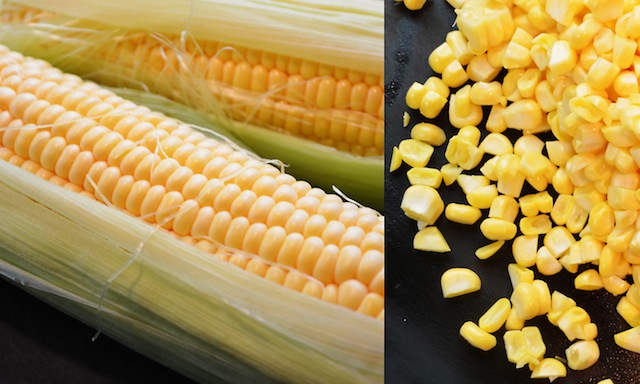 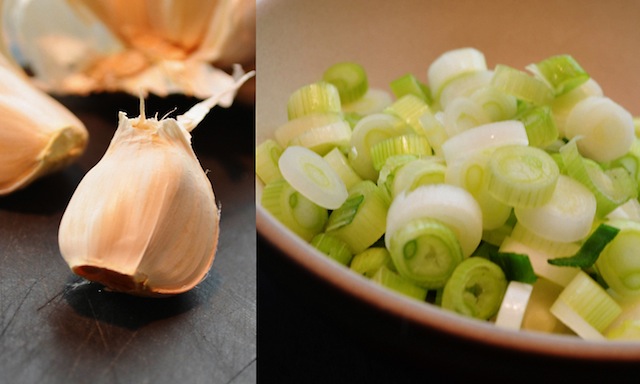 Once the dough has had a chance to chill, lightly dust a work surface, then roll the uncooked pastry into a circle that’s roughly ten inches in diameter and an eighth of an inch thick. Gently lift the dough (wrap it around a rolling pin if you’re worried about tearing), lay it across a nine-inch fluted tart pan (the kind with a removable base), and gently press it against the bottom and up the sides of the pan. Trim any excess that may have formed along the edges, puncture the base in a few spots with the tines of a fork, then cover the interior with a 10-inch round of wax or parchment paper, and fill with dried beans or rice. (As is probably clear, both the puncturing of the tart base and the covering of it with the dried beans is designed to keep the pastry shell from bubbling during the baking process, the goal, of course, being to end up with a perfectly flat receptacle for the good stuff to follow.) Bake in a 350-degree oven for 20 minutes or so, carefully remove the paper and the beans, then bake the shell for another 5 minutes, or until it’s lightly browned. (Note: this final baking process took me more like 15 minutes to achieve the desired color, so you may need to adjust accordingly). 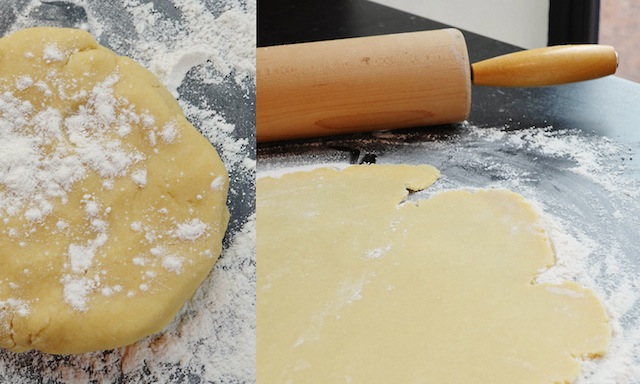 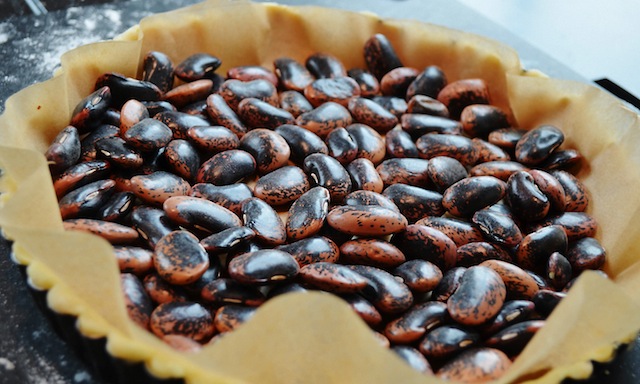 Next up is the layering of the baked tart shell with its two farm stand fillings—first the corn mixture, then the heirloom tomatoes (both of which can be prepped while the shell is in the oven). For the corn component, sauté 1½ cups of corn (from 2 ears; see tip below for an easy method for shucking and de-silking) in a medium saucepan, along with a ¼ cup of onions and two cloves of chopped garlic (both given a 4 minute head-start so that the onion is already translucent when the corn is introduced). After 5 minutes or so, remove a ½ cup of the corn and onion mixture from the pan, set this aside, then add a cup of heavy cream to the corn still on the stove. Bring this to a simmer, transfer to a blender, puree until smooth, and add to the bowl containing the ½ cup of reserved corn. To this mixture you whisk in the eggs (including the one egg yolk), the scallions, the Tabasco, and a small amount of salt and pepper, pour into the prepared tart shell, and bake in a 300 degree oven for 30 minutes or so, or until the custard is just set. (Here again, my oven required an additional five minutes beyond Boulud’s instructions, so keep an eye on things and use your judgment. Remember, the goal is to end up with something that is no longer liquid, but that’s not so firm it won’t jiggle when you move it.) 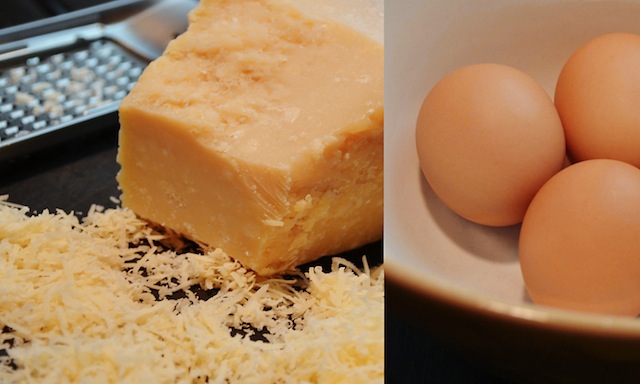 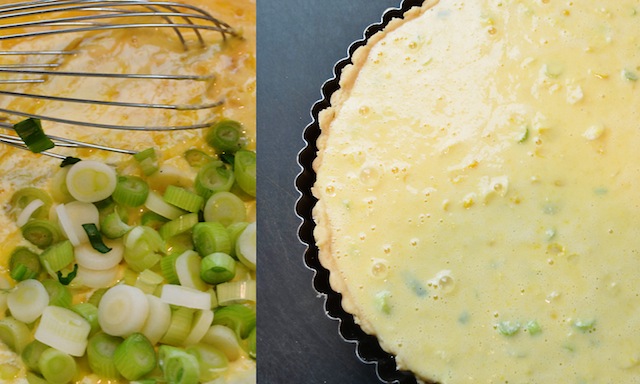 While the corn custard bakes you can deal with the tomato topping, which involves little more than tossing a ½ pound of thinly sliced heirlooms (either the cherry or larger variety are fine), along with a ¼ cup of grated Parmesan cheese, a small amount of smoked paprika (which imbues the whole dish with a subtle bacon-y flavor), a 1/3 cup of panko bread crumbs (great for soaking up the tomato’s juices so that the tart doesn’t go all soggy on you), and a sprinkling of salt and freshly ground white pepper. Once the custard is set, the tomato mixture can be laid across its surface, and the whole thing is slipped back into the oven for another 15 minutes, or until the tomatoes begin to break down and the breadcrumbs turn golden. Let cool slightly (twenty minutes or so will do it) and dig in.

This may seem like a lot of steps—Hell, it is a lot of steps!—but none are particularly taxing or time consuming. And even if they were, I’d say it was a small price to pay for something this bright and summery. For me, it’s the perfect mix of rustic and refined, the crunch of the cheese and breadcrumbs giving way to the softness of the tomatoes, the smooth flan-like quality of the corn, and finally the buttery crumble of the tart base. What more could you want this time of year? 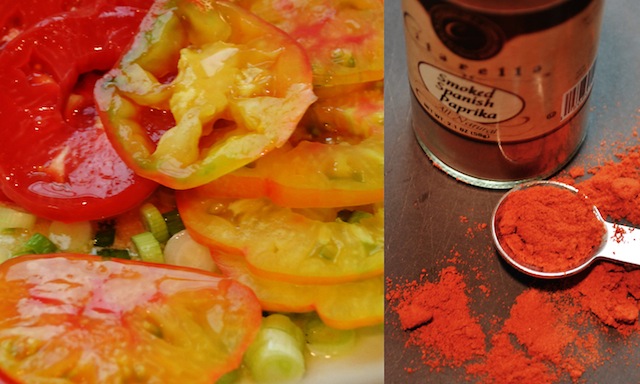 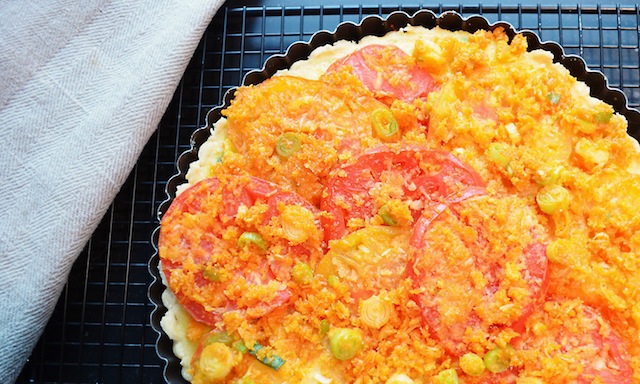 NOTE: To facilitate the husking and de-silking process (one of my least favorite cooking tasks), here’s a handy trick I found in a recent issue of Cook’s Illustrated: With a sharp chef’s knife, cut off the stalk end just above the first row of kernels. Place 3 or 4 ears on a microwave-safe plate and microwave on full power for 30 to 60 seconds. Hold each ear by its uncut end and shake up and down until the cob slips free of the husk and silk. The corn will have heated up enough to release the husk, but the kernels remain uncooked.

Directions for tart shell:
—Combine flour, butter, and salt in a food processor and pulse until crumbs form. Add egg and pulse until the mixture resembles moist curds. Turn the dough out onto a work surface, and knead once or twice to pull the dough together. Flatten into a disk, cover with plastic wrap, and refrigerate for at least 1 hour. (At this point, the dough can be kept refrigerated for up to two days or frozen for up to a month.)
—Center a rack in the oven, and preheat to 350˚. Cut a 10” diameter round of waxed or parchment paper. Place a fluted 9” tart pan with a removable bottom on a baking sheet. Lightly dust a work surface and the top of the dough with flour. Roll the dough out into a round that is approximately 10” in diameter and 1/8” thick. Fit the dough into the bottom and up the sides of the pan. Trim excess dough even with the pan’s rim and, with the tines of a fork, poke a few holes on the bottom.
—Line the shell with the paper round and fill with dried beans or rice. Bake for 18 to 20 minutes. Take the pan out of the oven and carefully remove the paper and beans, then bake the shell for 3 to 5 minutes more, or until lightly browned. Remove and let cook in pan on a rack. (The shell can be kept covered at room temperature for up to 8 hours.)

Directions for filling and final assembly:
—Preheat oven to 300˚. Melt 1 tbs of the butter in a medium saucepan over medium heat. Add the onion and garlic and cook, stirring, for 4 minutes, or until the onions are translucent. Add the corn, with a sprinkle of salt and pepper, and cook, stirring, for 5 minutes. Reserve ½ cup of the corn mixture in a medium bowl. Add the cream to the saucepan, bring to a simmer, and then transfer to a blender. Puree until smooth and transfer to the bowl with the reserved corn. Whisk in whole eggs, egg yolk, ½ cup scallions, Tabasco, and another sprinkle of salt and pepper until well combined. Pour the mixture into the prepared tart shell, and bake for 25 to 30 minutes, or until the custard is set.
—Meanwhile, melt remaining butter, transfer to a medium bowl, and toss with the remaining scallions, tomatoes, Parmesan cheese, smoked paprika, bread crumbs, and salt and pepper to taste. Once custard is set, remove tart from oven, and arrange tomato mixture on top. Return tart to the oven and continue baking for 15 minutes more, or until tomatoes are soft and bread crumbs are golden. Let tart rest for 20 minutes before slicing. 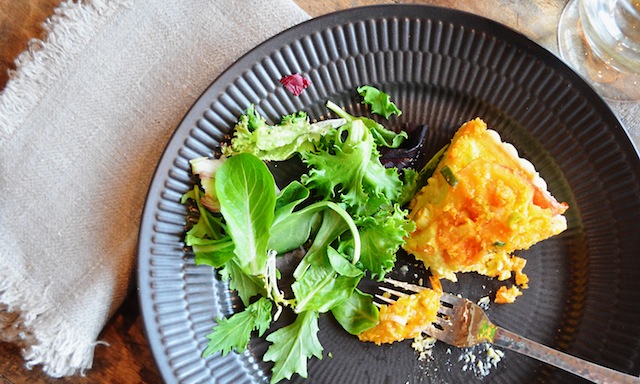