Adapted from the June/July, 2013 Fine Cooking

The heat is on here in the northeast, and in a sustained way I can’t remember experiencing before. Or maybe I just have a short memory for discomfort… though I tend to like summer weather, a sentiment I’m definitely not experiencing this time around. More likely it’s a combination of the temperature being higher than usual, and the fact that my foot and the lower part of my leg are encased in a spongy black material, the various panels of which are held in place by wide strips of industrial grade Velcro. (My torn tendon is healing but the 5-pound boot that’s helping it to get there must stay in place for at least another few months.) It’s a combination that can make the daily question of “What’s for dinner?” a particularly daunting one, especially when posed at the end of a torrid day as I limp home all flushed and sticky. Sometimes the answer is as simple as a salad, or if I’m feeling particularly wrung out, a few generous pats of goat cheese smeared across stalks of cold celery (and eaten right out of the fridge). Other times, though, something more filling is called for. On those occasions I tend to be drawn to the sorts of exotic dishes one might find in some far-flung destination where warm weather is a way of life. I suppose that’s one reason I was drawn to this dish for spiced lamb patties with apricot couscous. 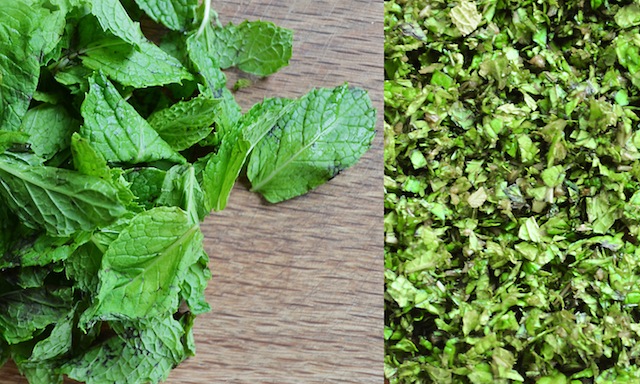 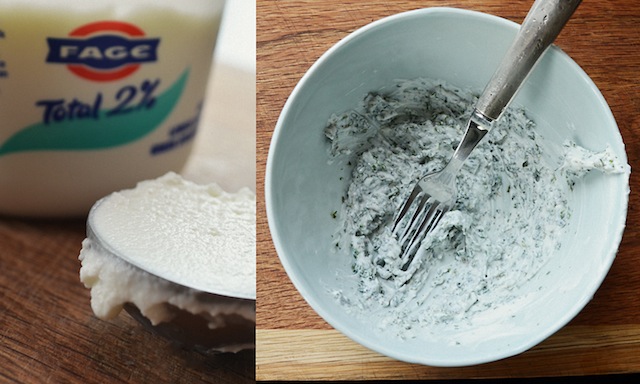 Weirdly, lamb is something I’ve tended to stay away from in the past, and especially when the temperature rises. My trip to Morocco last December, however, seems to have changed that view, as it opened my eyes not just to the pleasures of lamb but also to how well-suited it is to warm weather eating—as long at it’s paired with the right ingredients. Although this dish (which I found in a recent edition of Fine Cooking) has more in common with Middle Eastern cooking than it does North African, it does bear certain similarities to the lamb dishes I sampled on my trip to Marrakesh in that it offsets the rich flavor of the meat with bright notes offered by things like lemon, olives, and a variety of dried fruit. Here that quality is achieved through the presence of three principal ingredients, namely dried apricots (which are mixed into the couscous accompanying the dish), plain yogurt (which is added to the meat before cooking and which also serves as a sauce to cut the richness of the meat), and fresh mint (which is added to the yogurt sauce, as well as sprinkled over the finished dish). Together these ingredients—the tart apricots, the tangy yogurt, the cool mint—provide the lamb with just the lift it needs to feel summery and bright, while still having the heft of a proper meal. 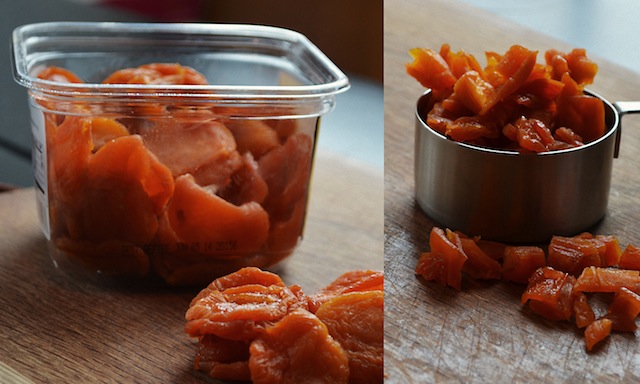 And none of the dish’s various elements require much time in the kitchen, which is a good thing since no one wants to stand over a hot stove when it’s this warm outside. Couscous, of course, is always simple, and this version requires nothing more than bringing some chicken broth, the diced apricots, and a little salt and cumin to a boil over high heat, stirring in the grain, then removing it from the heat and covering the mixture for 5 minutes, until all the liquid is absorbed. And since the other elements require so little time to come together, once the couscous is cooked you can pretty much forget about it, simply fluffing the grain with a fork and adding a little olive oil and salt just before serving. I should also mention that while I played with the idea of some other accompaniments here—mashed cauliflower, say, or sautéed greens—ultimately I think the couscous is best. For one thing it just feels right in the company of the lamb and the yogurt. And for another, the sweet/tart note of the fruit gives the dish just the added zip it needs, not a mention a jolt of sunshine-y color. 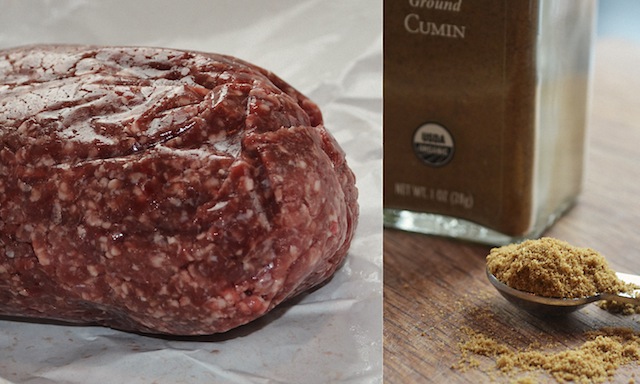 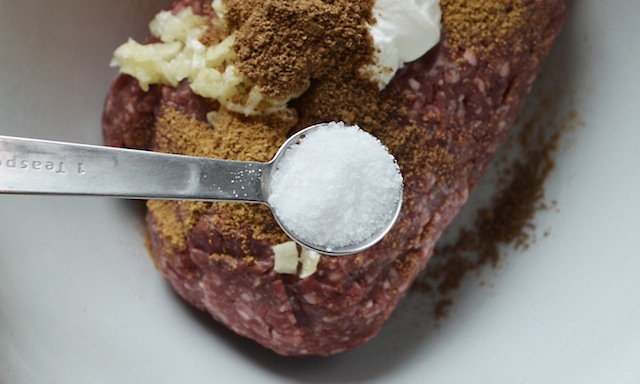 As for the lamb, this is mixed with a tablespoon of yogurt (to help keep things moist), two large cloves of garlic (mashed to a paste with a pinch of kosher salt), and a little coriander, cumin, salt and pepper—a combination that imbues the meat with a subtly exotic spiciness. Once all the ingredients have been evenly distributed, divide the meat into eight patties, each about a ½-inch thick. These are then fried—and tuned once—over medium-high heat in a heavy skillet containing 2 tablespoons of hot olive oil (shimmering but not smoking) for between 5 and 7 minutes. The lamb is done when the exterior is browned and crispy and the centers are light pink. Be careful not to overcook the patties though as they’ll toughen up (a risk that comes with over-mixing the meat, as well, so be careful).

All that remains is to prepare the yogurt accompaniment, which simply requires stirring a little chopped fresh mint into some plain Greek yogurt. That said, when it came to serving the meal I did find myself wishing there was more sauce to spoon on to each plate, so instead of the quantities listed in the original recipe, I suggest doubling the ingredients—to 8 tablespoons of yogurt and 4 tablespoons of mint. The cool flavor and temperature of the combo is just what the lamb needs, so you’ll want to make sure you have enough for every delicious bite.

And with that the words “heat wave” begin to sound kind of appealing. Stay cool everyone. 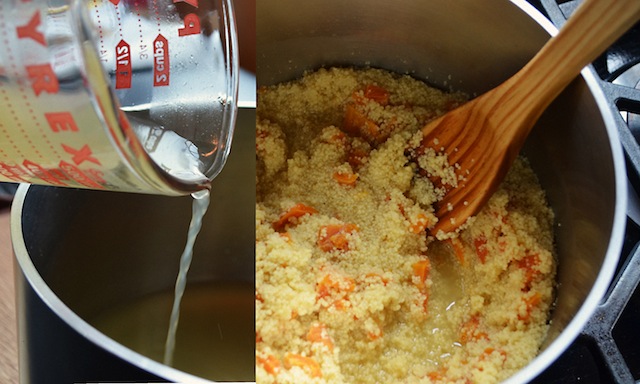 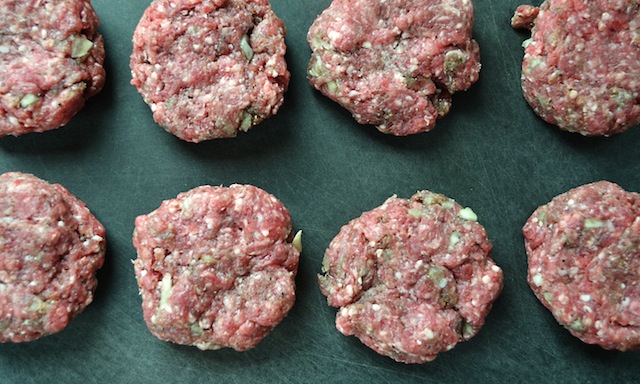 Directions:
—In a 3 qt. saucepan, combine the chicken broth, apricots, ½ tsp salt, and ¼ tsp of the cumin; bring to a boil over high heat. Stir in the couscous, remove from the heat, and cover. Let sit until all of the liquid has been absorbed, about 5 minutes.
—Meanwhile, in a large bowl, combine the lamb, 1 tbs of the yogurt, the garlic, coriander, the remaining ¾ tsp of the cumin, 1 tsp salt, and ½ tsp pepper. Mix by hand, taking care not to overwork the mixture. Shape into eight ½-inch patties.
—Heat 2 tbs of the oil in a heavy-duty 12-inch skillet over medium-high heat until shimmering hot. Add the patties and cook, flipping once, until browned on the outside and barely light pink in the center, 5 to 7 minutes. (TRG note: be careful not to overcook or the patties will be dry and tough.)
—Meanwhile, in a small bowl, combine the remaining 4 tbs yogurt and the mint. (TRG note: I ended up doubling the yogurt sauce as I didn’t feel the recipe, as written provided enough. If you do this you will need 8 tbs of yogurt and 4 tbs of chopped mint)
—Fluff the couscous with a fork. Mix in the remaining 1 tbs oil and season with salt and pepper. Divide the couscous and patties among four plates. Add a dollop of the minted yogurt on the side and garnish with additional mint.