Adapted from Jerusalem: A Cookbook by Yotam Ottolenghi and Sami Tamimi

Last week a group of friends came over to watch the Golden Globes and the squash purée you see before you is one of the things I made. I’ve always loved hummus and thought this recently discovered recipe might offer a nice alternative to that Middle Eastern classic. Here the use of butternut squash and the date (or maple) syrup takes the place of the chickpeas and the lemon—a combination that makes for a sweeter experience overall, as opposed to the tart/tangy quality one associates with hummus. I love anything tart and lemony, of course, whereas I’m generally less drawn to the sweeter end of the spectrum. Still, I figured if there was any occasion that called for deviating from the standard fare, an(other) awards show dinner was it (though the Globe’s co-hosts, Tina Fey and Amy Poehler, more than did their part to keep things interesting). And upon further reflection, it also occurs to me that my recently completed journey through Morocco may have awakened in me an appetite for the exotic—something this spread satisfies in a way that hummus (widely available in most U.S. markets now) simply can’t. Which is not to say this dish approximates anything I sampled in Marrakesh, unless you count the way sweetness is featured in things other than dessert there (a phenomenon I encountered at nearly every meal). Whatever the case, this recipe spoke to me. 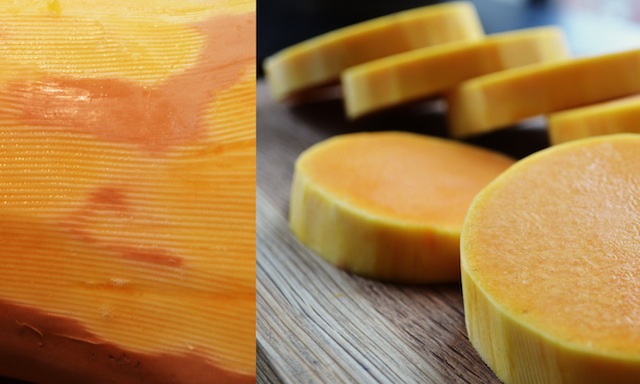 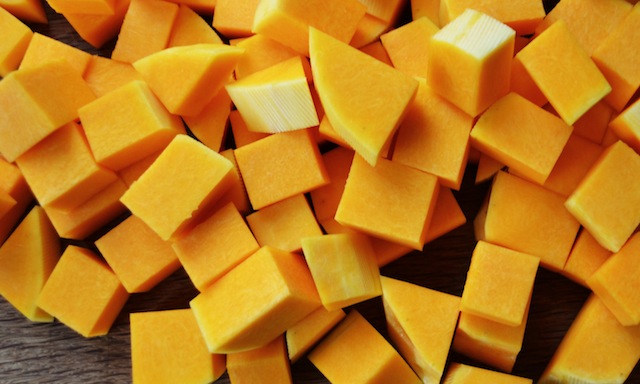 It’s one I found in Yotam Ottolenghi and Sam Tamimi’s new cookbook, Jerusalem. I’m sure many of you have heard of these two (or at least of Ottolenghi, who is the better known—he was the subject of a recent profile in The New Yorker), but for those who haven’t, this is the third cookbook from the pair (the others are Plenty and the eponymously named Ottolenghi). Either way, the two have understandably become a bona-fide culinary phenomenon in London where they own and operate several restaurants offering a mash-up of dishes inspired by ingredients and recipes featured in that broad swath of the planet known as “the Middle East.” They also do amazing things with vegetables, so if you’re looking for interesting vegetarian options, their books are a great resource (a side note: though Ottolenghi wrote the vegetarian cooking column in The Guardian for many years, he is, in fact, a meat eater, which is perhaps why I tend to find his vegetarian recipes so appealing). 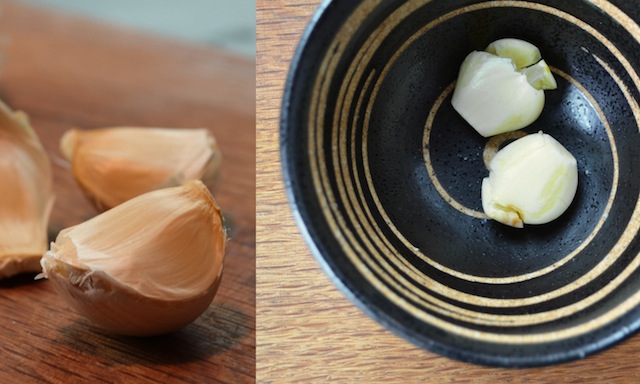 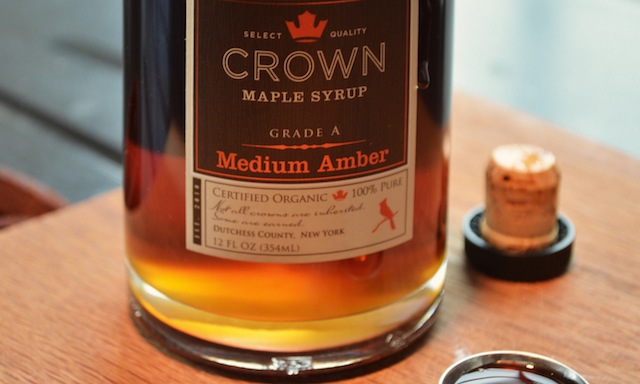 That was certainly my reaction when I came across this recipe, and one I credit at least in part to the presence of the tahini, the Greek yogurt, the garlic, and the sesame seeds—all components I felt had the potential to produce something interesting when married with the natural sweetness of the squash. But I’m getting ahead of myself; before any of those ingredients are introduced, one must first tackle the peeling of the squash and the carving of it into chunks. Once that’s complete, the resulting one-inch (or so) pieces are tossed in a roasting pan with some salt and cinnamon before the whole mixture is slid into a 400˚ oven for 70 minutes, or until the squash is fork tender. Easy stuff, though if you’ve never peeled a butternut squash before (I had not) be prepared to lay down your vegetable peeler and pick up a paring knife instead. This bears mentioning because the shape and contours of the squash are such that much of it is simply not accessible by a peeler’s blade, and can only be reached with the aide of a sharp knife. That said, don’t worry if the knife inadvertently removes some of the vegetable’s flesh (which, unless you have the carving skills of Michelangelo, it probably will); if you’ve selected a very large squash as directed there will still be more than enough to work with. 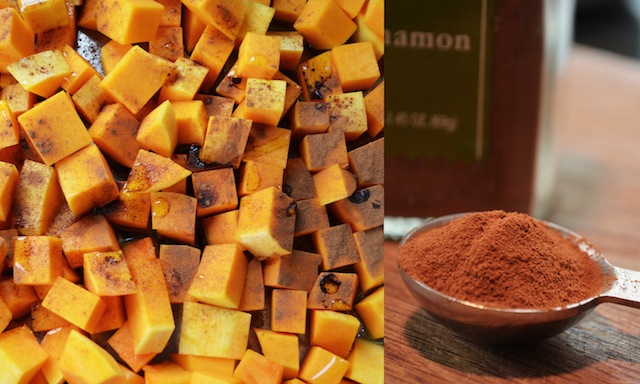 I point this out because when I emptied the contents of the pan into my food processor (after allowing the squash to cool, something achieved in little more than half an hour), I found I had quite a lot of squash to work with—not so much that it wouldn’t all fit into the bowl, but close to it. And once I whirred it all together with the tahini, the yogurt, and the garlic I discovered I had considerably more than was needed for the ten people who’d be snacking on it. That said, if you were to serve it as a side dish (which, incidentally, is not one of the scenarios suggested by the recipe’s creators), the quantity produced would quite adequately feed four big-eaters. It’s an option I encourage you to consider as the mix of flavors—the sweetness of the squash, the tang of the tahini and the yogurt, and the concentrated hit of sugar delivered by the syrup drizzled across the surface of the spread just before serving (along with those sesame seeds and some chopped cilantro)—offer a welcome counterpoint to, say, a few thick slices of pork tenderloin. 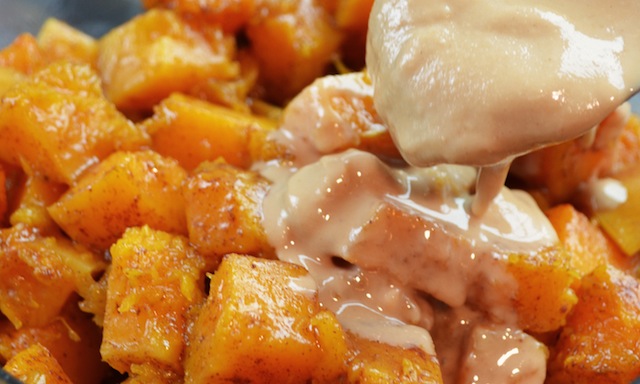 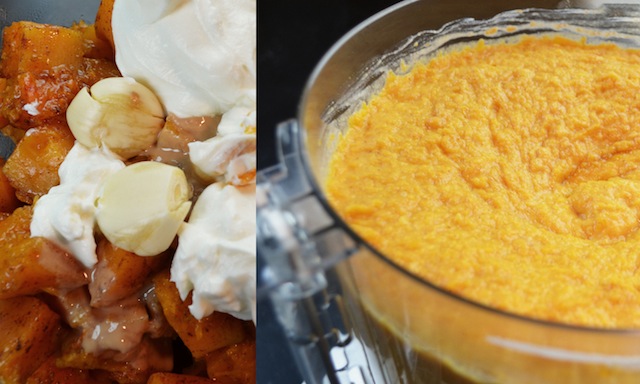 Of course, the spread is also immensely satisfying in the context Tamimi and Ottolenghi propose: as an appetizer, served with bread. I offered it with warm pita slices, and while I acknowledge feeling a little anxious about how it would be received (in large part because of its sweetness) it was a big hit and largely devoured by the time the main course made its way to the table. For me, part of the appeal can be attributed to the liberal sprinkling of those sesame seeds in the final moments of preparation (use black as well as white if you can find them, for no other reason than they look so good!), along with a few tablespoons of freshly chopped cilantro, and it makes as warm and sunny a statement on the plate as it does when it reaches your mouth. In other words, it’s just the thing to brighten up these cold, gray days of winter.

Note: Date syrup can be found at many health food stores and Middle Eastern groceries. 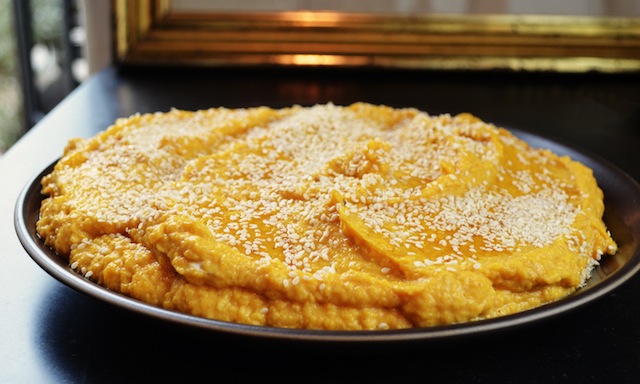 Directions:
—Preheat the oven to 400˚F.
—Spread the squash out in a medium roasting pan. Pour over the olive oil and sprinkle on the cinnamon and ½ teaspoon salt. Mix together well, cover the pan tightly with aluminum foil, and roast in the oven for 70 minutes, stirring once during the cooking process. Remove from the oven and let cool.
—Transfer the squash to a food processor, along with the tahini, yogurt, and garlic. Roughly pulse so that everything is combined into a coarse paste, without the spread becoming smooth (you can also do this by hand using a fork or potato masher).
—Spread the squash purée in a wavy pattern over a plate and sprinkle with the sesame seeds, drizzle over the syrup, and finish with the cilantro, if using.
—Serve as an appetizer with bread (warm pita is ideal) or as part of a selection of small Middle Eastern dishes. 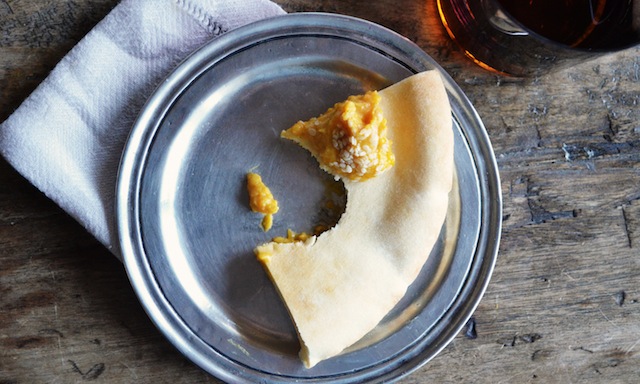